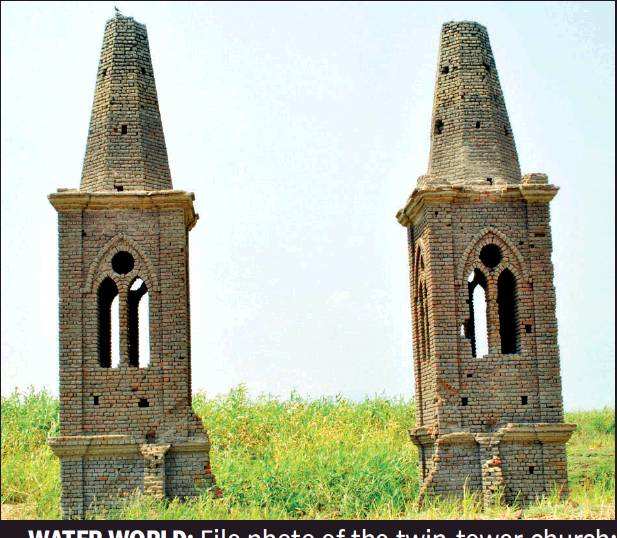 Where a steeple plays hide and seek

The waters of the Mettur dam hide many ancient structures. As the water fell to 70 feet, the spiers of a century-old church became visible. If the waters drop to 40 feet, an ancient temple and fort built by the kings of Mysore would emerge. The structures are all that are left of the 27 villages, which were moved when the dam was built in 1934.

The appearance of the structures depends on the rain gods and the water level of the dam. For the past decade, the towers were on view in 2013 and almost every year since 2017. As the waters recede, the religious structures and the fort are reminiscent of the vibrant society that once populated these areas.

The 119-year-old “twin tower” church stands in the ancient village of Nayampadi. The church was completed in 1902 by Father Antoine. He had built a “twin” tower church in the village of Nayampadi during British rule. Construction of the Mettur Dam was completed in 1934 and the church on the banks of the Cauvery River was reportedly submerged soon after. Over the years much of the structure is covered with silt and now only the spiers are above the ground.

C Thangavel, 70, a villager from the nearby village of Pannavadi, says the villagers of Nayampadi were asked to demolish all their homes when they moved, but they left the Jalagandeshwarar temple, the Nandi statue and the church. . Likewise, the fort in the adjacent village was also left untouched, only to be inundated by water from the river.

According to researcher AT Mohan, Jalagadeshwarar temple and fort were built by Tipu Sultan around 350 years ago. “The temple and the statue of Nandi are visible when the water level of the dam is below 42 feet,” he said. The statue of Nandi, he said, was gigantic with a height of 20 feet and the temple was located behind it. “This is a rare construction of a Shiva temple, where Nandi is built with his back to the deity,” he said. Although the temple is there, the villagers had moved the deity after building a new temple in Palavadi, during the relocation.

The fort known as Fort ‘Raja’ and located at Kottaiyur near Nayampadi is now on the verge of destruction. Locals lament that the remains of the mandapam temple, the statue of Nandi and the church are all on the verge of collapse and need attention, said SV Gurunathan, another villager. Historical researchers, too, say it’s a long-overdue request to take action to save the monuments. “Few farmers use their land for agricultural purposes when the water level drops in the dam,” Mohan said, further damaging the monuments.

While the water is still expected to recede, coracle rowers are hoping for good deals as the place provides a great vantage point for tourists. “Due to the Covid-19 pandemic, we haven’t had any good deals and could have income if the authorities allowed coracle rides closer to these monuments,” said V Palanivel, a rower.

The opinions expressed above are those of the author.