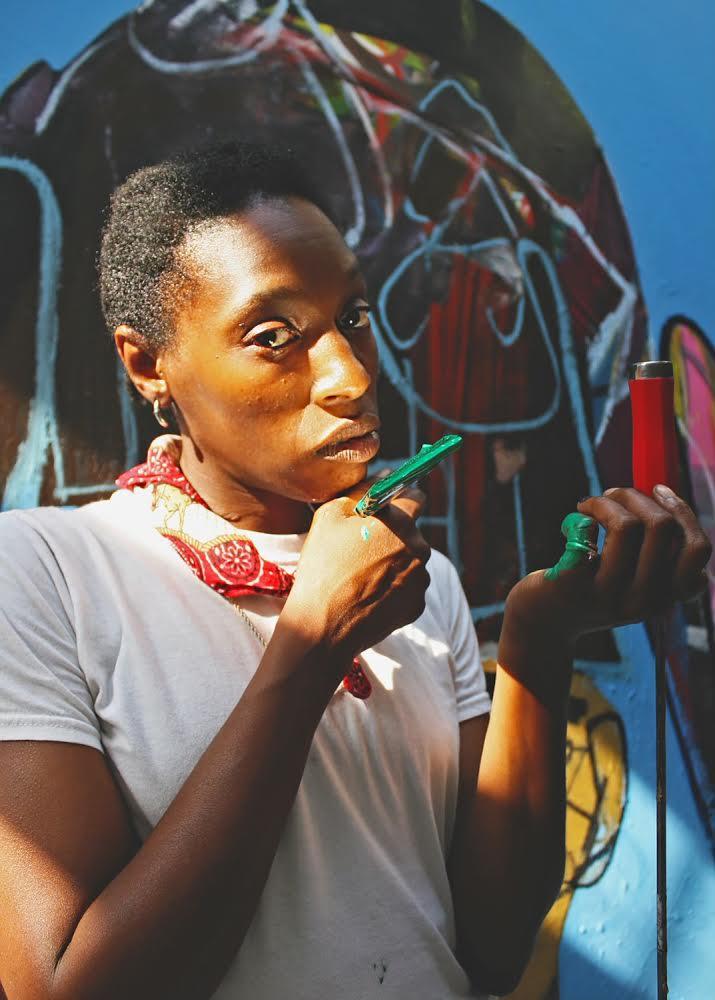 Genesis Tramaine pray for you

Genesis Tramaine started drawing in church when she was a child. She liked to sit at the back of the benches, chatting and clowning with her friends, which of course got her in trouble. “I was very raised in the tradition that children are seen but not heard,” says Tramaine, who grew up in Brooklyn and currently lives in Newark, New Jersey. She found that if she opened a notebook, or even a Bible, and sketched out what she wanted to say in it, she didn’t get scolded.

She kept the practice of making art as a form of worship when she became an adult. When Tramaine goes to church now, she brings her painting supplies with her. First, she spreads them out on the bench next to her. Then she closes her eyes and begins to pray with her hands, on the paper. “I think there is a way to trace the energy of God,” she said.

The works she creates under the spell of the divinity she loves with all her soul will be exhibited at “Worship Works”, an exhibition of ten paintings open at Almine Rech from July 16 to August 1. The ten paintings are portraits. , but not real people. Instead, they are the result of Tramaine communicating the gospels in painting. “I prayed for the Holy Spirit to lead me and I let myself be led,” she said.

Tramaine is grateful that the Holy Spirit directs her hand to paint portraits, as she believes they provide an entry point for the viewer. “A portrait is something we all recognize,” she says. “A portrait allows a conversation without words. ”

Tramaine’s portraits are studies in motion. Facial expressions change and move several times on the same face. The mouths open and close. The hair shrinks and expands. The chins fall down. The colors are primary; the lines are bold. Despite the abstraction of the faces, their outlines are clear. The comparison is obvious between the portraits of Tramaine and the portraits of Pablo Picasso and Jean-Michel Basquiat. But also, the work of outsider artist Hawkins Bolden, a blind man who created anthropomorphic statues that are themselves imbued with something beyond the tangible.

Tramaine says she meditates on saints and stories from the Bible while she paints. That of Jacob and Esau, two brothers who fought for the inheritance of Isaac, their father, in the Old Testament. That of Rebecca, their mother, who prayed to God for a child. There is a lot of gossip on the page, in their stories. There are judgments to be made about behavior, and who deserved the most. If only we could all understand the mysterious workings of God within the contours of a nose, two eyes, a mouth, a fade. “Jesus loves women,” reads the title of one of the paintings. If only we could all close our eyes and ignore the Catholic Church.

Tramaine knows that her Christianity will make others uncomfortable. The world of contemporary art, after all, is not known for its sacred devotion. Added to this is the fact that Tramaine identifies as both queer and Christian, despite the apparent contradiction between the two. “I can make people misunderstand me and I can make a love spell out of it,” says Tramaine. “My homosexuality is beautiful. All the colors live in me. God is greater. “

Most of the paintings in the Almine Reich exhibit were made during the pandemic. Tramaine’s Church – Unity Fellowship NewArk Church – was not open for service, but church leaders allowed her access to the sanctuary to draw and paint on her own. She listened to jazz and gospel music while she worked. Tramaine knew people were suffering, so she increased the fervor of her prayers. “I can be a silent saint when I need to,” she said. “I blossomed.”

To learn more about the job, visit Almine Rech’s website.

Native plants in red, white and blue | Clubs And Organizations

Alis Headlam: Bias are blinders that prevent people from seeing each other