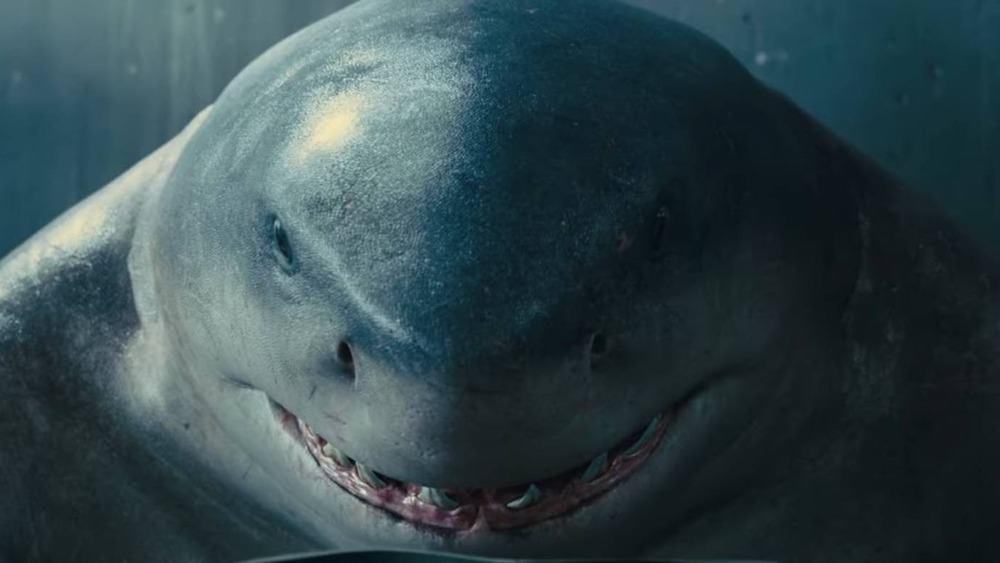 Explain the tallest member of the Suicide Squad

Who are we most excited to see in James Gunn’s upcoming Suicide Squad movie? I think the most popular answer is King Shark. Who is this atypical character? Well, it’s honestly a little sad that he’s not a household name, because he’s such a fun character. I have a feeling that casual comic fans might not be too familiar with this character, but in recent years he’s been primarily affiliated with the Suicide Squad. That explains his inclusion in the next movie, but let’s be honest, he’s clearly the elephant (in this case the shark) in the room everyone is watching. And on a very hilarious note, this King Shark is voiced by the one and only Sylvester Stallone. Can it get cooler?

So first of all, why did James Gunn choose to add King Shark to his Suicide Squad? Well, even David Ayer initially chose him to be part of his Suicide Squad in the 2016 film. He ended up choosing Killer Croc over him because he didn’t want a CGI character. It was an understandable decision, as Killer Croc’s makeup was done very well. It’s such a shame that David Ayer didn’t really give much to the famous Batman villain. Well, that doesn’t seem to be the case with James Gunn and his version of King Shark. From the trailer, it looks like this character could very well be the best character in the movie.

If you’ve watched the trailers, it looks like King Shark isn’t the smartest character on the team, but he’s the biggest and maybe the meanest. The humanoid shark literally tears people apart and eats them. It looks like a one-dimensional character, but if you listen to him speak he sounds really likable. In fact, even when he’s not trying to eat people, he’s just minding his own business and doing normal things. He reads books, gets excited when meeting new people, and even offers a friendly smile. He’ll probably only try to eat you if he’s hungry. Hey, he’s still a shark at heart.

Many YouTube comments from the trailers will continue to say that this King Shark will become the Groot and Rocket Raccoon of the DC Cinematic Universe. I would say that’s a very precise assumption, given the way James Gunn wrote King Shark. That makes perfect sense, considering that James Gunn gave us Rocket and Groot from the Marvel Cinematic Universe, the two unexpected and hilarious mascots of that universe. A talking animal? Check. Is he illiterate? Yes. Can he be adorable and funny one minute, then transform into a real destruction machine the next minute? Absolutely.

Needless to say, I think James Gunn will give us the new DCEU mascot, just like he did for the MCU. Who better to do it than James Gunn? Much like Rocket and Groot, King Shark was not very popular prior to its live-action debut, but The Suicide Squad will likely change that. With a cast of colorful and lesser-known characters, I think having King Shark on the team will be a nice addition.

But where did King Shark start? His presence in DC Comics was growing long before he joined the Suicide Squad. In fact, he made his debut in 1994 as a Superboy villain. He basically made his comic book debut like Jaws’ shark did in the movie, hiding in the ocean and preying on victims. But one day, Superboy saved a girl from this shark, but noticed he had arms. After the incident, a special agent named Sam Makoa observed the girl’s injuries and revealed that the creature was a humanoid shark hybrid named Nanaue.

According to Sam Makoa, Nanaue was the son of an ancient shark deity known as the King of All Sharks. Although Makoa himself did not believe this myth, he was initially responsible for the King Shark’s capture and imprisonment. King Shark then escaped and along with Agent Makoa, Superboy made it their mission to capture him. They eventually tracked him down to his human mother’s house, where they discovered that she had deliberately allowed him to bite her arm so that he could feed. Talk about coarse love, but still maternal.

It was the start of King Shark and his origins were never really set in stone. DC loved to play with his origins, from making him a mutant to a true son of an ancient deity. The latter was apparently confirmed in an Aquaman story in 2006 when he apparently had conversations with his father. And for the record, a villain named King Shark would be a perfect fit for Aquaman. This character has fought several heroes, Superboy and Aquaman being his greatest enemies.

And let’s not forget that he had an argument with Batman. Speaking of its inclusion in Suicide Squad, check out the best Suicide Squad animated film. If you haven’t seen the 2014 Batman: Assault on Arkham movie, you’re missing out. It takes place in the Arkham games universe and King Shark is once again the team’s tank. He even faces off against Batman and the hero really has to fight to beat him. It was a very impressive scene.

Will James Gunn Really Explore King Shark History? The trailer for him has Amanda Waller explaining that he’s the son of an ancient shark deity. It’s something they can really get into, but knowing James Gunn, he’ll find a way to make it funny. That’s okay, because the fact that he’s already making this character adorable and creepy at the same time is amazing. But again, that’s the James Gunn thing. I personally find it better than the Flash series version.

In my opinion, this King Shark looks cool, but it’s a bit more generic and looks like it might belong to a low budget horror movie. It suits the CW shows, but The Suicide Squad gives us something different. I’m super excited to see King Shark’s live debut in the DCEU and yes we can call him the Groot of the DCEU. Is it even possible not to see it?