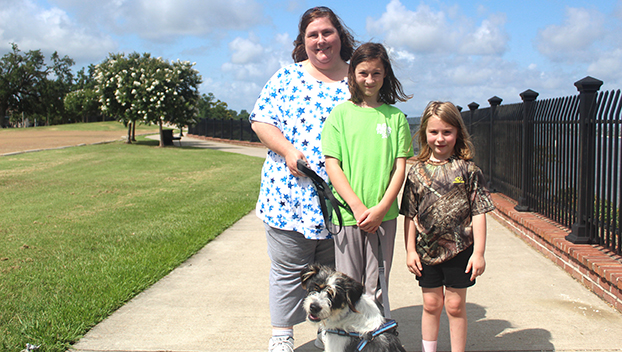 NATCHEZ – ACCS teacher Brooke Newman walked with her dog and two children on the Natchez Cliff. They stopped to watch the Mississippi River near where The Dart landed on Friday.

“My parents were both in education, and it felt natural to follow in their footsteps,” Newman said. “I love children. I like children. I decided I would prefer to be in class.

She first taught at Jonesville Elementary for a few years before moving to Ferriday Lower for 10 years. She said she started teaching at CASC nine years ago and has taught there ever since.

Newman’s daughters, Sage and Mallory, joined her as they walked around the cliff with their dog Oreo. He was adopted by the Natchez Adams County Human Society. She said they had no problem finding things to do.

“We’re walking today because it’s cooler and we’re just trying to get out of the house. Oreo is very energetic, ”Newman said. “When you have children, it’s not difficult to find things to do. We went to the ark and creation museum in Kentucky. We had Holiday Bible School, and I’ll be back in class soon to prepare. My children usually come with me and help me.

Her husband, Chris Newman, is a nurse at the Riverbridge Specialist Hospital in Vidalia. He was previously at Merritt Health in Natchez, she said. They met at the First Baptist Church in Natchez.

When on leave, the couple enjoy going out and attending CASC events, she said. His daughter Sage plays soccer and will play softball next year. Newman said she appreciates the people of Natchez more than anything else.

“I love the people I know and the community here,” Newman said. “I made a lot of good friends and got to really know a few people since moving here.”

UNDERSTANDING PRAYER: Why I Don’t Pray