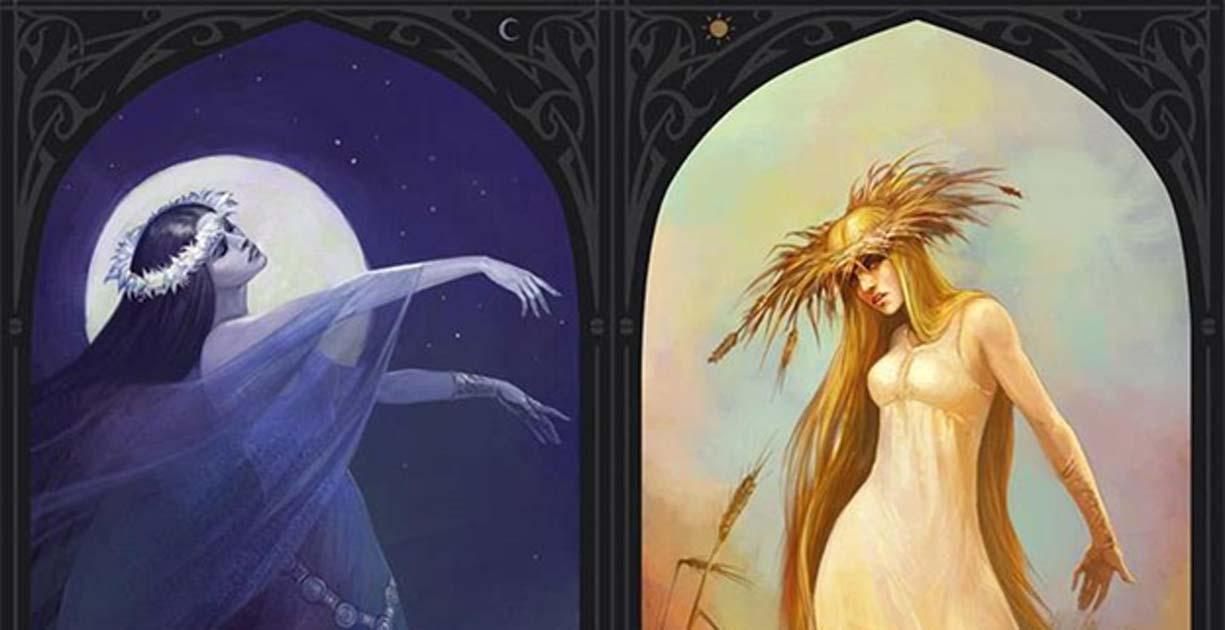 A cycle of life and death: the Slavic goddesses Morana and Vesna

Forever intertwined, Morana, goddess of winter and death, and Vesna, goddess of spring and rebirth, could not exist without each other. However, they also couldn’t exist in the same place at the same time. These are the forces that kept the ancient Slavic world in a cycle of death and rebirth. One goddess loved for her beauty and generosity, the other feared and hated for her ugliness and darkness. Modern traditions are an echo of how these two were once celebrated and ritually murdered, and they show just how interconnected goddesses were and continue to be.

Morana, the goddess of winter and death

Commonly known as Marzanna, her Polish name, Morana (as she is known in Czech, Slovenian, Serbian, and Croatian) is the Slavic goddess of winter and death. Also known as Moré, in Lithuanian, Morena, in Slovak and Russian, and Mara, in Belarusian and Ukrainian. Some researchers believe that the etymology of its name derives from the Proto-Indo-European name for death “mor” or “mar”, or the Latin word for death “mors”. However, it is not clear if this is the true origin of its name due to its history as it fits into Slavic mythology, as we will see later.

Although she has been compared to the Greek goddess Hecate when it comes to witchcraft, as well as the Roman goddess of agriculture, Ceres, there are some distinct differences that set her apart from these similar traditions. She is most often seen as a carrier of death, as in Slavic mythology, when Morana seduced Dazbog, the sun god. Once Dazbog moved on to another lover, Morana poisoned him. In retaliation, Dazbog burned Morana and banished her to Nav (the underworld of Slavic mythology).

This story of retaliation coincides with the movement of the sun throughout the year; it was the belief of the ancient Slavs that the sun descended into the underworld in winter. In this sense, Morana is literally winter; she pulls Dazbog into her embrace during the winter, but he breaks free in time to bring in the spring.

There are many sources which contribute to the entire account of Slavic mythology. While the above story is just one of the components. Other stories, especially among Russians, tell that Morana lived in the “Palace of Mirrors”, which can only be accessed through the Kalinov Bridge. The palace is protected by snakes and represents the place the Slavs associate with funerals, once again showing her role as the goddess of death and the underworld.

While most traditions recall her role as the goddess of death, another tradition asserts that she was not always the embodiment of death. In fact, it is said that she was once a goddess of fertility and life, but soon withered into an evil and deadly old old woman. It is this story that makes it doubtful that her name derives from the word for death in many languages, since she was once a life goddess of the same name. 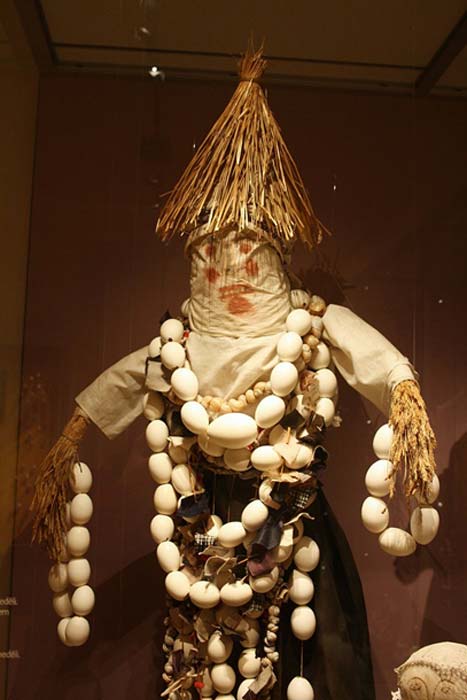 She is most often depicted as a terrifying-looking woman, with pale skin, long dark hair, and sometimes she is depicted with the claws and fangs of a wolf. She is sometimes compared to the Germanic demon “Mare” who came at night to sit on the chest of victims until they choke. In other traditions, she is a young girl dressed in white. For the most part, she appeared as a withered old woman with an ugly face, however, it is said that to those who were not afraid of her, she would appear as the beautiful maiden.

From this representation of her as a young girl comes the dressing of her effigy in the ritual associated with her in the Slavic tradition. Traditionally, the ritual took place on the Fourth Sunday of Lent (once the ritual was authorized by the Catholic Church, after being banned in 1420 by the Polish clergy), and nowadays it takes place on the fixed date of March 21. .

In the ritual, an effigy of the goddess would be made of straw and dressed in pieces of white cloth, ribbons and necklaces. It is after this point that some traditions vary. In some rituals, the effigy was burned, in others, it was taken to a river or a pond to be drowned; in some cases it would be burned and then drowned. The symbolic death of the goddess would then allow the rapid arrival of spring and prosperous harvests for the year to come. 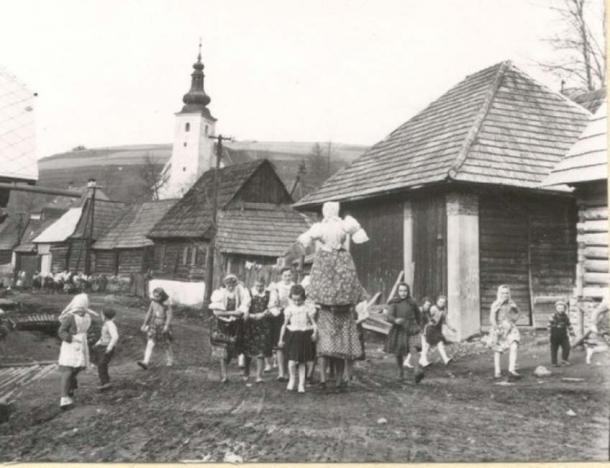 Today, as in the past, the ritual is usually performed by young children, especially young girls. These were the children who carried the effigy and who stood next to the procession, traditionally carrying juniper branches. In modern times, the superstition associated with ritual has all but disappeared. However, school children continue to sing traditional songs, burn and drown effigies, and participate in a party to celebrate the arrival of spring.

Vesna, goddess of spring and rebirth

Also known as Devana in Polish lore (or Vesna Devana which is more closely associated with fertility and hunting), Zhiva and Diva, Vesna represents everything Morana is not. She is the goddess of spring who was born from Morana’s death and winter. As such, she is closely tied to the rituals that accompany Morana’s death, as she could not exist without them. 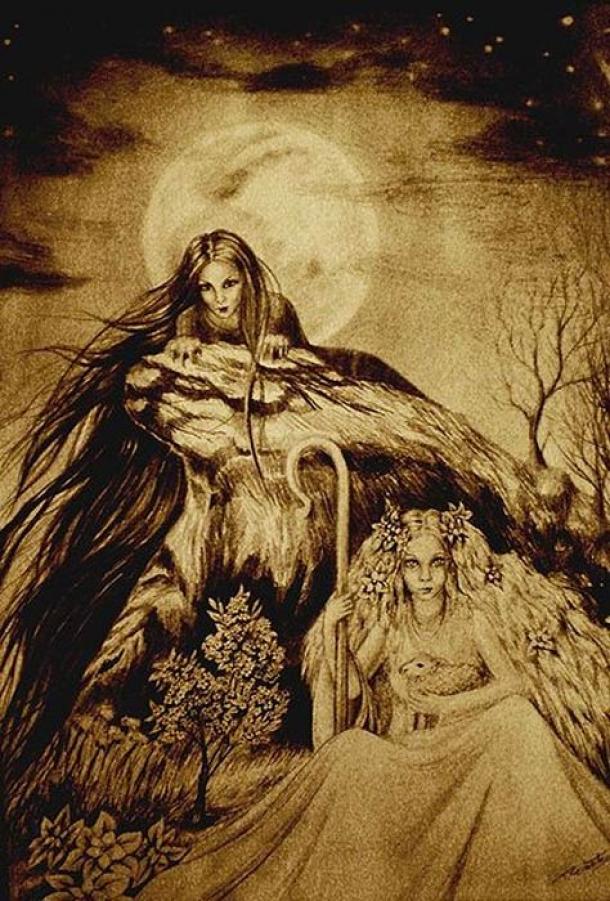 Morana and Vesna cannot exist in the same place at the same time. In the 19th century, Vesna’s return was celebrated on March 1 with a procession walking through the fields with the figure of a clay lark decorated with flowers, while songs were sung to the goddess. This appears to be one of the only traditions that recognize the goddess as a full-fledged one, as opposed to being associated with Morana’s death.

Unlike Morana, she is described as beautiful, full of life and fertile. She is generally portrayed as smiling, barefoot and bare, except for a few leaves and flowers covering her body. Her hair is shown as long, like Morana, but she has a fair complexion and rosy cheeks.

These traditions show the singular goddess “Vesna”, but there is a mythology surrounding the plural “Vesnas”. They were female characters associated with spring just like the singular Vesna. They are said to have sat in a palace on top of a mountain where they decided the fate of the crops for years to come and that of the human inhabitants.

This is closely related to the appearance of Vesna bringing spring and hopefully a prosperous harvest. The Vesnas are also related to another name for Vesna, Diva. Samodivas are woodland fairies of Slavic folklore who were only active in the spring and fall when descending from their palaces on top of a mountain.

However, this departs from the singular Vesna as they are associated with evil and are more fairy than they represent a goddess. As such, the Singular Goddess and her counterpart Morana are more common in Slavic mythologies.